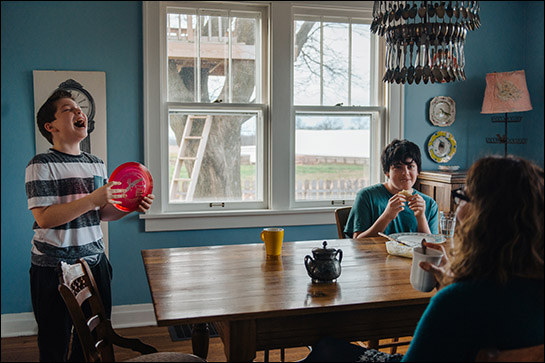 Homeschooling, parents are always looking out for minefields. There is no blueprint we can follow and there aren’t many established best practices. But the thing that makes it a minefield is we can’t see the danger before we step on it.

The minefield I have most recently discovered –– because I’m standing in it –– is the breakfast table. I read tons of studies saying that kids who eat meals with their families do better in life, so we’ve logged about 15 years of family breakfasts. But here’s another thing that happens during the meal: kids gain a sort of apprenticeship in the work their parents do. It’s called the breakfast table effect.

I have thought about this for a long time because I had to put an instrument in my son’s hand for him to become a cellist. So I had to like the idea of playing an instrument before my kid would play an instrument. And he had to have some talent to want to play as much as he does. I told myself it was mostly genetics.

The nature/nurture studies show that twins who never meet usually pick similar careers. So I don’t think parents can make a kid like to do something. There is too much research to show it’s already programmed when the kid is born. But what kids do as kids is still very influenced by parents –– for example, there’s no cello lessons if there’s no money.

A joyous childhood or bad childhood is a result of parents. And if kids are going to be really good at something in childhood it will be in large part from their parents. This is where the breakfast table effect comes in. Your kids are going to spend their childhood learning about the things you put in front of them. Which means your job. The work you do.

I see this now because my older son is writing. A lot. I didn’t encourage it. I mean, it makes no money. And also, I don’t believe in teaching kids to write formally. It strikes me as pointless. Yet he’s been writing every day, and sending it to me for feedback. Something I’m sure he learned from seeing me edit other writers.

That got me thinking about other kids who have a breakfast-table-effect thing going.

I wrote about the famed Wojcicki girls following in their father’s footsteps into college majors.LH

I noticed that Michael Jordan’s kids played basketball. Which probably wasn’t great for them. They didn’t have much talent and then while they were kids they didn’t branch out to see what else they were good.

I read a crushing piece in the New York Times that I recommend everyone reads about two boys growing up in an army family. It’s a piece about the breakfast table effect of the army. It’s also a piece about how difficult it is for parents to encourage kids to do things we don’t do ourselves.